Recently someone posted a comment on one of my video on my youtube channel, I thought that It`d be interesting to share it here. The video content is just about a walkthrough (?) about a game that I played entitled Catherine ; from ATLUS, the creator of Persona series.
I dont usually talk in my own videos, unless Im really tired or hyped for no reason, and yeah, that was one of the time. Anyway, I talked in English, and Japanese( and some Malay (?) ) and someone responded ( sarcastically perhaps ? ) that they heard that both of my language are good and asked which am I.
In which I replied " Im neither, Im Malaysian "
That was 2 months ago the time when the video only barely got 1000 views, but recently another person came and left a message read " proud to be Malaysian "
That when I realized that my comment about Im Malaysian got 8 thumbs up. Haaa~~~ Ramai jugak la orang Msia~~ 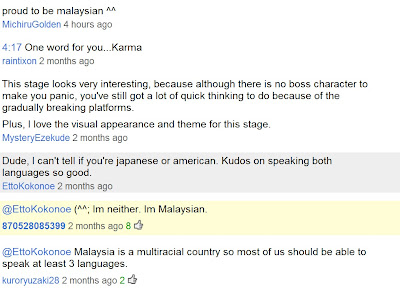 Plus there`s this one guy said that most of us should be able to speak 3 languages, true enough. I guess?
Again, proud to be Malaysian, here`s the link to my youtube channel. Lately nothing been uploaded, Im thinking of uploading scenes from Suzumiya Haruhi no Tsuisou but we`ll see.
By Unknown