Kyon found a letter in his shoebox. The sender was not Asahina ( big ) nor the revived ( though still in "Canada" ) Asakura.

The letter tells Kyon to meet her at the clubroom later that evening at 6.

"I have this question that i dont know how to solve"

"If its something researchable, then just research it then"

"There are no materials about it"

"Hurm~~ Math? Then you need to know how to solve the question first. What theorem did it use?"

" What are you elementary student? Theres no point of studying in that"

"Its OK. I just need to understand the thought of the one asking the question."

"Oh~ History is it? Just imagine what the author wrote during the period, something like that right?"

"Such a boring question. The real answer; like novels etc is only known by the author and no one else. In the end there`s no real answer to that."

"In my case, the one giving the question is actually the author actually"

"Then that would be much easier" 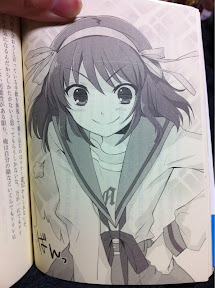 "Just ask the one whos asking"

Hearing Haruhi answer, Kyon realized that instead of thinking what the answer wouldve been, its much more easier to ask those who know.

Hence, he went to search for Yasumi during afternoon break.

But she was nowhere to be found at the 1st year floor.

Thus, he decided to check the clubroom, only to find Nagato, alone.

"`nobody` is quite harsh isnt it? Watahashi Yasumi is a normal student isnt she?"

"Student with such name doesnt exist in this school"

"Oh, a fake name? So someone become Kitakou student and infiltrate after school, is that it?"

"That assumption is correct"

"Yes, that incorrect. And she`s also not someone from another world. I cant say anything for the time being. I decided that it is for the best"

Then Kyon showed her the letter he got.

"She meant no harm. Rather, I interpret that she is thinking to help you."

After school, SOS brigade assembled at the clubroom. Yasumi told Haruhi and Asahina that she had an urgent business and couldnt come today. She left a flower to Asahina to decorate the clubroom. The flower intrigued Koizumi interest. He even took some pictures and sent them somewhere.

Later, they all went home, not wanting anyone to be suspicious, Kyon went back together with the others. On the middle of the way....

" Sorry, I left something at the class, I`ll go back to fetch it"

in which Haruhi responded

" Huh? You dont even took home your textbooks, no need to bother then"

"Taniguchi gave me an ero book, and I left it in my desk."

"I couldnt posibbly let anyone see that. Its a REALLY REALLY ero book"

Haruhi made a shocked face. Koizumi smirked. Asahina looked mad. And nagato nodded a few mili. Kyon felt like he shouldve made another excuse instead.

When he dashed back, Haruhi scold from afar

"Baka Kyon!! Dont talk about ero book in from of innocent girls!!"

Innocent girl? Who is she referring to? Owh~ Ill just apologize to Asahina tomorrow.

At the clubroom Yasumi is already there.

"What will happen next?"

"I dont know myself. But we will find out soon enough"

Not long after that, someone knocked the clubroom door

Kyon, Sasaki, Fujihara and Ryoushi met up and then took a taxi. Kuyou wasnt there, Ryoushi told Kyon that she`d be there. And by "there", their destination is.... 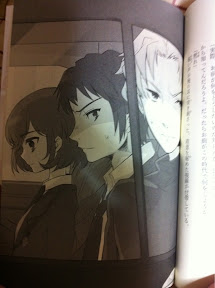 In the taxi, Kyon and Sasaki asked alot of question about their motives. Fujihara seemed like he wanted to change the future. Kyon said that Asahina once told him that that is futile, and Fujihara was pissed.

After all 4 of them arrived at Kitakou, something strange happended.

Sasaki disappeared and the scenery changed. They`ve entered another dimension, the same one like the "dream" he and Haruhi had. Only Kyon figured that this dimension belong to Sasaki`s actually.

Thinking it might be a trap. Kyon tired to get out, but just like the time with Haruhi, and invisible wall prevented that.

Having no choice, Kyon just folowed them, to a place where he`s most familiar with.

Will you be doing part 6?