So next is koizumi phase. On this loop, haruhi knows about Kyon, but Koizumi doesnt. Koizumi was quite jealous Kyon being in good term with Haruhi. Even calling her "Haruhi" instead of "Suzumiya-san"

So Kyon suggested that Koizumi make Haruhi interested in him instead. Hence.... 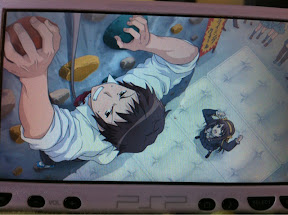 They joined rock-climbing ( and wrestling before that ) 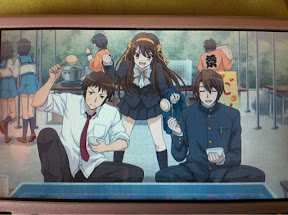 On the next day, Koizumi entered mr contest. 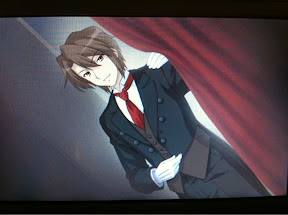 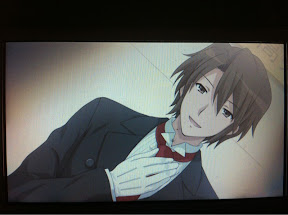 But unfortunatelty he didnt win. Hence they took a picture like this... 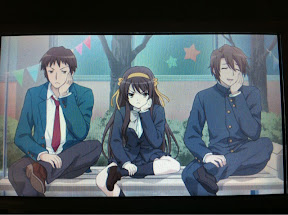 After that they took a more normal? picture 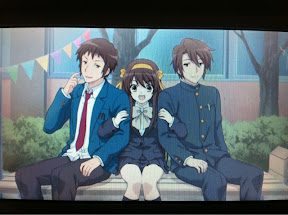 This picture is a vital key in thia game. With this the completion is only 60%. 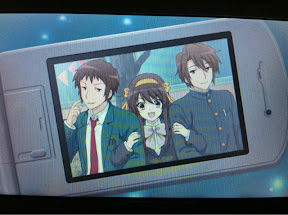 "Sos dan with 2 people short" -Kyon
WALTHROUGH
Talk with Koizumi
俺がどうした？＞
ハルヒと何の関係？＞
俺の関心は世界平和だ＞
おもしくたてばいい...
i think... leave in the comment if Im wrong. Im just doing this based on what I remember. LOL
There should be a junction, pick the first 1 ( the up ) and the first one after that too. place a bookmark before that if you want to get the images for the below choice.
Then Taniguchi should talk to you after that. If not, than you might have chosen the wrong route.
On the morning of the second day DO NOT choose the further right or you`ll felt asleep and have to reloop. Just the others.
Than Haruhi should met up with you and Koizumi shall be entering the mr. contest, the problem is you dont have the custome.. Ops, you do, you have the bunny suits, but that wont do. Place a bookmark here.
you searched but no prevail, dont mind. After that youll met up with Haruhi again and just let them go home. After that go to the custome mark ( the forth one ) you`ll get a butler costume.
Reloop at the bookmark I told you to place earlier or start from the beginning.
Give Koizumi the butler shirt, and..... I think that should clear this phase.
The next phase involve ALOT of looping, Ill post it if and only if someone bother to ask.
Good luck~
Oh, if you just wanted to know the ending ( what happen to the Nagato on Disappearance of Suzumiya Haruhi ) just watch this VIDEO (sorry, deleted). However, i put my save file, wrote some synopsis on the next post.
- iphone
By Unknown

Hey, i always stuck after i talking with koizumi
After the 2 choices i always back to the upper route
and get the small imouto end
How do i go through the butler competition?
Regards

Yup yup, you havent got the shirt for the competition. Its inevitable to loop for the first time. Go get the butler suit and youre OK.

Ok, thanks for the info
At last.. now i can get through it
And i think need another help
I stuck again in the 4th phase
I just can't get hands on
Item No.33 タイムテーブルのミスプリ
On the asakura route
Even i don't know how many times i reloop, can u help me out? :D
Thanks again

Oh~ You are doing the class stage Im assuming? The one that Asakura didnt send in the electric usage form.

Sorry I couldnt be much of a help, I havent played the game for quite some time.