Someone asked me to be more thorough about what happen with Nagato Yuki and Kyon in Reminisence.

Reminisence, as the movie Dissapereance, put the spotlight Yuki, rather than the main heroine; suzumiya haruhi.

But of course, you guys must already knew about this, seeing as youre still reading this.

Yuki phase..... Is really long actually. Being the last person to remember Kyon, the problem she was facing is quite... Urm, problematic?

Just when Kyon arrived at the parallel world, the first person he met was Nagato but she ran away after Kyon asked her a few questions.

The next time Kyon meet her was when Nagato is having trouble carrying some boxes to the clubroom. Koizumi phase if Im not mistaken. 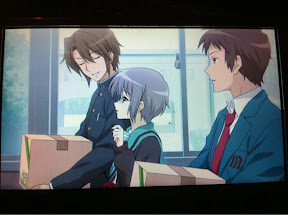 1st problem comes to light; She has got nowhere to sell. The book she wrote was a little late in printing, so she couldnt set up her stall untill the first day of the gakuensai. When asked by the Computer Ken whether she can use her space for the game they`d made, she OKed. And well, after the book came, she decided to just throw them away. Thats so like Nagato.
But there came the main heroine. Despite not being a student of Kita-Kou, Haruhi, along with Kyon and Koizumi ( Mikuru later came to deliver Yakisoba but her phase still incomplete ), they managed to get Computer ken to share the space once again. 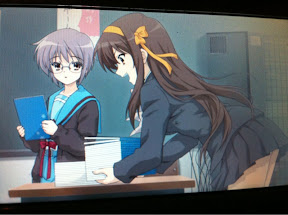 Thus Nagato managed to get a space to sell her book, well, a desk is more like it. You can see behind Nagato theres still a server behind the place where they want to set up.In the game, some of the lines from her book was read, its some kind of a poem(?), really beautiful.
But when you sell poetic books with only a desk with a gigantic server behind you and people playing video game beside you, they tend to dont sell. 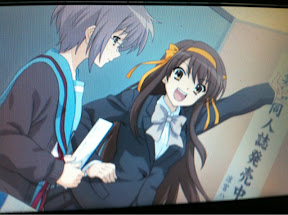 The next loop/phase Haruhi managed to make Computer ken take the server elsewhere and but a poster behind the store. 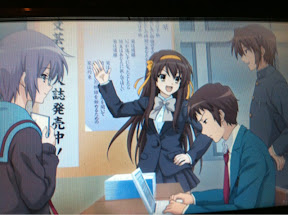 Although with all those things, the book only sells 4/5 i guess?

And then comes Nagato phase. This time Kyon focused only to help Nagato.
The thing they came up is a fortune telling. Nagato will fortune tells and the result is a one phrase from the book she`s selling. 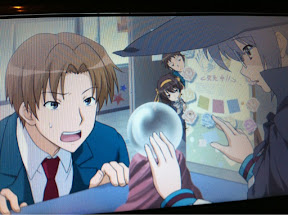 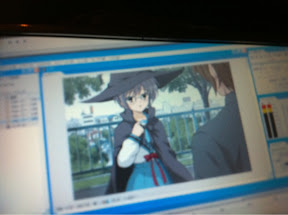 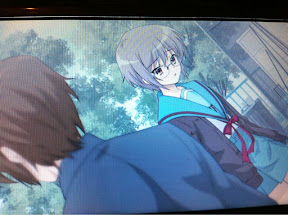 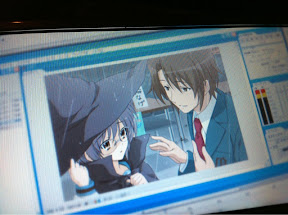 In the middle, Asahina joins in, and the managed to get this picture. This picture marks the end of Kyon`s venture. This was the final key to restore the time data. 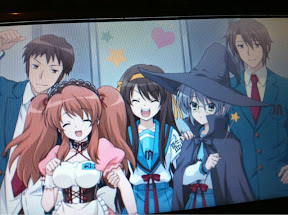 But then he felt like theres something more she couldve accomplish. Hence, he went back, and made the thing he wanted to do. Form the SOS brigade and make a movie together.

The title is The adventure of Nagato Yuki episode 00 if Im not mistaken. Its the same with The adventure of Asahina Mikuru episode 00, only they battle with poem lines, and the ending is the esper Koizumi want to go with Nagato to the other planet. 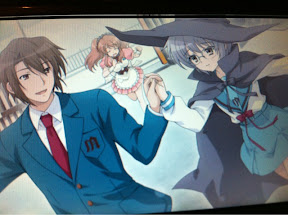 Although during the movie, Nagato was pretty reluctant, and when you have to approach her and talk to her, theres one part that she hinted that she like Kyon. >.< Plus, theres this one part where Asahina needed to take care of her yakisoba cafe ( and couldnt take part in the filming ) and Nagato, Haruhi, Koizumi ( 3 different loops )take her place instead. 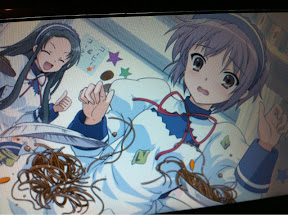 In the end, with the movie aired on the finale of the gakuensai, people rushed to buy the book afterwards. The total sells was 137 ( or some number like this ). When they are celebrating, Haruhi found 4 club entry forms.
Nagato: Those are... No, I just like o imagine... How nice would that be if all of you... Are part of the literature club. I know that impossible..
Haruhi: No, its not. Im joining
Koizumi: But we are from another school
Haruhi: So what? is there a rule that stated a student from another school cant enter this club? Thats against human right!
Kyon ( in his heart ) iya, theres actually.
ROFL.
She wrote the entry form and on the club name she wrote { Literature Club (SOS brigade) }. Thus, the SOS brigade officially take its place in this parallel world.
When Kyon handed his entry form to Nagato, he was sent off to another parallel world. The very cold place that only has the literature room. With Nagato from the Disappearance inside.
Cold, and lonely. Patiently waiting for Kyon`s answer.
While in the movie, Kyon just abandoned her, this time Kyon gave her the entry form, and wanted to make an SOS brigade on this world. So Nagato wouldnt felt lonely anymore. 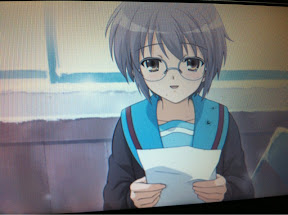 But just handing out the entry form is enough for her.
"Thank you...."
And Kyon was back at the real world. Its during the Christmas Nabe party when Kyon asked Nagato out to go to the library together during weekend. 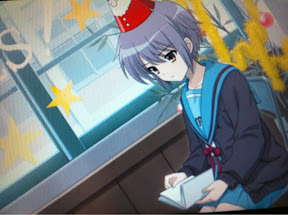 In which she replied after a pause. "I`ll think about it"

But well, in the end, it became the brigade activity instead of a date. 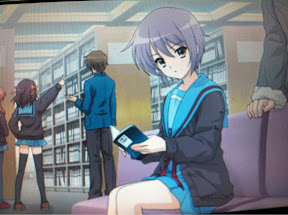 Kyon tells Nagato about a girl she saw, how she was lonely and did the greatest decision alone.
Nagato: Im sure that girl is happy. Because she lives right there, in your memory. 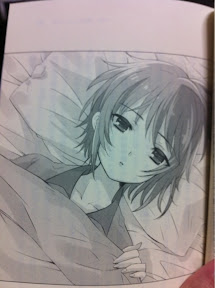 Since Im Nagato fan, I was extremely interested on this game. I dont have a Ps3 or psp, but I know I can deal with that using google, you know what I mean. The worst scenario here is that the game is in japanese only I guess. But after reading this article, I dont think this game is worth enough to play, since the main argument is pretty against the plot of the movie or novel. This "parallel world" cant exist, since It was Nagato intervention that created it using Haruhi Powers. So when Kyon returned to the moment when nagato changed the time line, got stabbed by Asakura, and faints, it supposed that the mistery man who took the gun, injects the nanobots on human Nagato to return her as a "robot" then restoring the time line and erasing everything about the "other" parallel world. So its pretty clear that theres no "two worlds" but one with a changed time line. This is well explained by Koizumi when they were at the restorant with Haruhi.
Well, I actually I reaaaaaally like the human nagato, her shyness is so pretty. I would like to play a dating sim with her as a optional character. Thanks for the article.