The next day, the second Sos brigade entrance exam was held. While there're 12 people on the first day, only 6 people are left for the test.

Before the test, a bunch of things were mentioned. Such as Kyon remember a distinctive kohai with a smile shape hairpin, Mikuru being a 3rd year and will be leaving thus will probably cause haruhi to reset the year, haruhi and him choosing what subject to take and only to have haruhi forcing him to take world history instead of japan history, koizumi and him making a bet about how many kohai will actually show up for the test, etc.

Anyway about the test.

Its a paper test.

The question were as follows:
1:Reason for entering SOS brigade
2:What can you attribute if youre accepted
3:Between Aliens, Time travellers, Espers, and sliders, which is the best?
4:Why?
5:Wrote about your mysterious experience
6:Favourite 四文字熟語 ( 4 kanji, kinda like an idiom, mine is 先手必勝 )
7:If you can do anything, what will you do?
8:Lastly, state your passion.
Bonus: if you brought anything interesting, additional mark will be given. 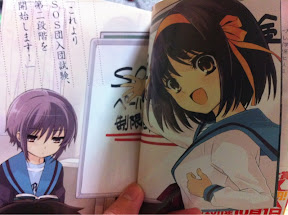 Anyway during the paper test, kyon, mikuru, and koizumi were told to leave the club room.

As for Nagato, Haruhi said that she can stay.

Does Haruhi still think Nagato as the room decoration?
-kyon(page 84)

Because he was chased out as Kyon walked in the club room., Kyon didnt managed to confirm whether the smile hairpin girl was there or not.

Anyway they decided to kill the time at the school cafe 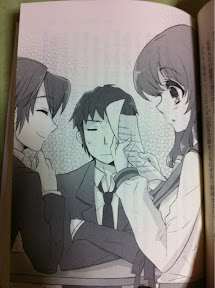 Meanwhile they look at the paper test and talk.

Koizumi said the test was interesting, especially about the third question.

When they came back to the club room, the first year is already told to go back, thus missing their chance to drink Mikuru's tea.

Lastly, Kyon hope that all these commotion will make Haruhi's mood better, at least until next week.

Determined to cure Nagato, even during the morning Kyon mind was filled about how is he going to ask Kuyou to break the curse upom Nagato.

But first, he has to tell Haruhi that he wont be able to come to Nagato house after school. However, for the first time, Haruhi was late. It wasnt until the bell rang that haruhi came in. Looking at Kyon looking at her, she made this pose. 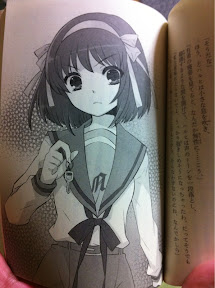 It seems she went to Nagato house before going to class to make her breakfast. The fever is low but...

"Watching her sleeping, i kinda felt like.... Dont get me wrong, but i felt like i want hug her tight. Because i kinda feel that if I dont, she will be gone forever.."
-Haruhi(p108)

Hearing that, Kyon feeling to see the "active" Nagato back rose. He told Haruhi about not being able to go to Nagato house afterschool in which Haruhi responded that would be a good idea since they might as well help Nagato bath and clean up.

With that Koizumi was told to stay at the clubroom by himself in case the first year came.

From here, Kyon monologue is seriously loooooonnnng. If they made a movie out of this then Sugita really has to talk a lot.

Anyway before he actually met with Sasaki and the others, Kyon recap his relationship with Sasaki, Kuyou, Kyoshi and Touhara.

Touhara is a time traveller, Mikuru`s enemy and said that It doesnt matter who hold the power.

Kuyou is from a different entity but very similar from Nagato`s, Nagato`s enemy and said that her interest is not in Haruhi but in Nagato.

But Sasaki is not Kyon`s enemy. Rather, both of them think each other as best friend.

Anyway~~~ about the negotiation.

Kiyou agreed to release Nagato curse after what she`s trying to do is completed, on one condition.

Touhara demanded Haruhi power to be transferred to Sasaki. 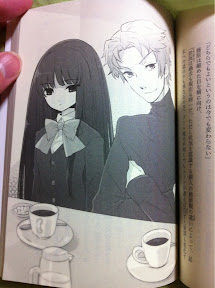 From here the mental attack started. Sasaki of course, objected the idea but Touhara said that she has no say in this. Plus, if Haruhi`s power been taken off, its not like Nagato, Mikuru, and Koizumi power has been taken off so for Kyon, it`ll be just as the same.. Or so he said. Touhara whos has no stand of who has the power said the change of power is just another route to fulfill his goal. Quoted; as 1x1 and 1/1 , both will arrive at the same conclusion but different way.

Touhara and Kyoshi then took their leave, giving a time for Kyon to make a decision. Leaving him, Sasaki and Kuyou.

When Kyon and Sasaki leave the cafe, Kuyou eerily follow from behind.

At the station, they bumped into Kunikeda and Taniguchi. Kunikeda was from the same school as Kyon and Sasaki so they knew each other. Taniguchi on the other hand, that was the first time for him seeing Sasaki. i.e he came to a conclusion that this is the weird girl Kyon likes. 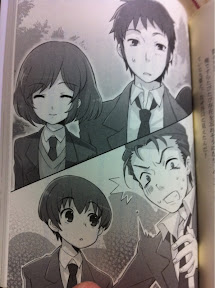 Remember during Disappearance Taniguchi said that he made a girlfriend during Christmas? The one that made him refused to attend SOS nabe party?

He even gave Kuyou a stylish watch, in which Kuyou still wears it.

Although, their relation didnt last long. When asked why did they broken up, Kuyou replied.

"I mistaken him for you"

When asked why did she still kept the watch, she said that its given becuase she wanted it at first. She was fascinated by the watch that kept going the same way and not because she still has lingering feeling for Taniguchi. ( who ran after saw Kuyou )

They later went home and the chapter ended.