But perhaps these worlds will collide later in the story. So ill just read them normally.

Anyway, the start of the second book! 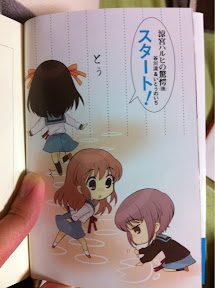 This part really starts when the class was over. All SOS club members assembled.

Of course, "All" here means the new member was there too. 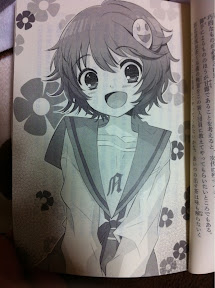 The kohai was pictures as someone energetic, and most of her line repeats and got exclaimination mark.. i.e

"And then, i want to wear maid custome! Aa, nurse too! Let me, ill do it. Please please please."

Oh well, anyway, Yasumi was told to learn anything theres to know. Hence, the first thing was the tea.

After she gave the teas, Haruhi asked Yasumi to make the SOS homepage looks better.

Yasumi is quite familiar with computer. Or at least she knows what she was doing.

While Yasumi was fixing the homepage, kyon suggested to Koizumi that instead of playing chinese chess ( that Koizumi brought and played a match), they should play catch ball for a change.

Thats when suddenly a paperplane landed at Kyon. Written OPEN on top. 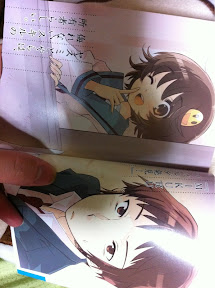 The plane came from the club room, there stood the lively kohai signaling to Kyon.

"To be able to open the hidden and encrypted Mikuru folder, Yasumi must be really good with computers..." -kyon

When Koizumi and Kyon went back to the clubroom, the website was done, and it was splendid. It even had Day Of Sagiterus 5 on it. Kyon was impressed.

Although Yasumi was nowhere to be seen, seemed like she had something to do and had to leave early.

The presense of the highly useful new member really lighten up the mood. 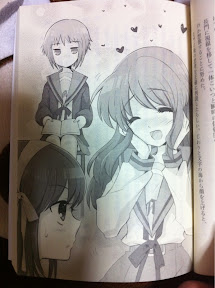 Mikuru thinks that the kohai is cute and really well mannered. Yasumi too managed to get closed with Nagato. How? She asked Nagato to lend her some books.

Not long after that, they went back.

Someone was at Kyon home, not Sasaki, but Yasumi.

Yasumi went back early to go to Kyon home.

However she only came to play. Nothing important was discussed.

After Yasumi when home, kyon sister asked who is Yasumi.

"I was wondering that myself" -kyon

Haruhi once again felt something is gravely wrong with Nagato. She felt that something big was going to happen. She even asked Kyon`s opinion wether they should just hospitalized Nagato.

In which Kyon responded no. Its not like hospital can be any of help to celestial being anyway.

They were both worried about Nagato in their own way.

During after class, Kyon met with Taniguchi to ask a few things about Kuyou when they were dating.

To summarize, Kuyou was the one who talked to Taniguchi first. They dated as usual, go to movies, eat, etc. Kuyou seemed to like fastfood; which for Taniguchi who doesnt has much money, was a good thing. She also show fascination about human evolution ( and even talked about it 2 hours straight ), and other difficult stuffs. Taniguchi kept dating her because she was beautiful and that was the first time a girl ever asked him to go out. Although it ended one day in a flash, Taniguchi arrived at the promised place for a date when Kuyou dumped him. ( just by saying " I made a mistake " and never contaced him again.

After that, Kyon went to the club room ( Haruhi told him to be there just in case a freshman came. ). There, stood someone unfamiliar to him.

" I was meaning to come here anyway, but seems like I made a mistake. Aaa, its hajimemashite ( nice to meet you for the first time ) with the senpai here right? Fufu~ Its OK, its OK. This kinda mistake isnt a big deal. Senpai, You can remember or forget seeing me here. Either way is fine. Im sorry for making this mistake, but you`ll found out everything soon enough! But if some troubles were to exist, please dont panic. Just promise me that OK. Its a promise OK. We made a promise OK. Ok~ ok~!?" - Yasumi (p67/68)

Kyon didnt managed to say anything and she just left. Leaving a vase with flower behind.

That night, Sasaki called Kyon to tell him that Fujihara ( the time traveler ) asked to meet tomorrow. Sasaki also said that whatever Kyon`s decision is probably the best.


The part before, I mistaken read Fujihara as Touhara. in my defend, 藤原`s 藤(Fuji) is the same as 加藤`s Tou. sumimasen deshita.

Anyway~~ this is the next part over HERE
- iphone