The most interesting part so far.

The part started with Haruhi came into the class late. A beta world dejavu, but this is the first time this happened here in alpha world.

When Kyon asked why, haruhi said the she woke up early, and made a bentou, and when she`s done its already late.

"Urm~ its kinda weird, but im wondering why myself. I felt like i have to cook. Maybe its a dream i had or something. Its as if like i had to cook for someone.... To make things clear, I dont make any extra ok, im going to eat all of them" -haruhi (p193)

Could it be that memory from beta world overflows to alpha world?

Oh btw, kyon replied that even if shed gave to him itd be trouble for him as well, where can he eat it? Definately not the class.

Thats not the only memory from the alpha world that overflown. After that kyon ask haruhi why she usually dont bring bentou, is it because her mother.

Haruhi was shocked. In this world, haruhi never said anything about her mother until that point.

The dejavu ended there.

Next was the final entrance exam. Haruhi..... Has no idea what was it going to be.

"How about 101 hamsters capturing competition?"

"Where can we get that much hamsters??"

"Shamisen is clean, plus dont just change it so drasticly."

"Then how about a cooking competition only using the weeds and grass found inside school?"

"If youre the only one that would be judging then gladly."

With whatever the competition in the shadow, haruhi, kyon, sos members along with 5 ( one short from yesterday ) freshmens arrived at the club room.

After telling them to change into sports wear, they were gathered at the field for the final test. A no timelimit no fixed distance marathon. 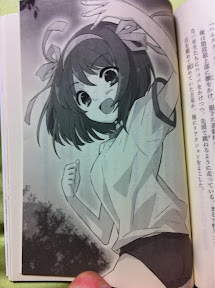 While Haruhi and the 1st years were running, Kyon asked Koizumi whether there are anyone "special" among the 5 person.

"No" was the answer.

However both of them agreed that one of them was this weird aura.

And that particular person managed to follow haruhi until the very end. Passing the test and making the track and field club eyes set on her. 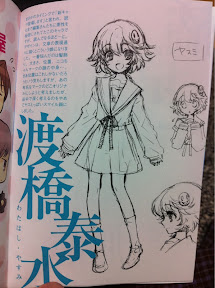 Watahashi Yasumi. Btw, she asked to be call yasumi with a katakana sound. In which kyon tsukomi, kanji and katakana sound is the same right??

Haruhi then confessed that the former idea was to fail them all. But she was shocked to see at the end one of the freshmen still managed to follow her.

However that girl did manage to take haruhi intention during the second exam. She saved her answer while rhe other was either burned or thrown away.

These are her answer sheat. ( check the questions on the post before )

4- i have answered them on the last question. Gomen nasai.

7- making city on mars and name it by my name. Like washington DC. Fufufu. ( this fufufu is written too )

8- If i were to say, I purposely lower my eyesight and wear glasses.

"Saaa, direct control jyanai? Kinda got that ring to it"

- haruhi and kyon (p236/237) Kyon later look from nagato but no answer. She made a "Search for yourself" kinda face.

When kyon look at the name, kyon remember the phone call he had ( on the novel before ). It was her.

Kyon somehow known her from somewhere but he dont remember.

However koizumi stressed that that girl is no one special. Kyon too look at that girl and doesnt felt anything like anything he encountered before.

Kyon still thinking of what to do. On the evening, he was left to stay at the clubroom with Koizumi. Instead of playing indoor games like usual, they decided to go outdoor and play catch ball.

It was during they were playing catch ball that they discussed about Kyon conflict.

The long discussion ended with a conclusion:

"Im on Haruhi`s side, so my judgement is bias. If only I know someone who know both side, then Id make him make the decision" -Koizumi said with his usual smile (p259)

He also said that Kyon judgement was never wrong and probably never will be.

After they came to that conclusion, Kyon went back home.

Back at his home, Sasaki was already in his room playing with Shamisen and his sister.

They discussed what are their next step but there are no real conclusion to their discussion.

When the discussion was over, Sasaki went home.

" Actually there`s one more thing I wanted to ask you. Its regarding my student life but I guess thats fine. I already have so much fun talking to you already" - Sasaki

" Perhaps that was her real intention of coming..." Kyon thought after she left

First book finished. On to the next book.