A quiet night in Nagaoka

It was Wednesday evening when a sudden urge came to everyone. " hey~ lets go out~"
Oh, I forgot to mention, I got my international driving license when I got back to Malaysia, and now I can drive anywhere I wanted to! yay me! hehehe...

Anyhow~ the 5 of us, Botch, Duan, Muazam, Ulya, and me decided to take a stroll, going to the station, etc. 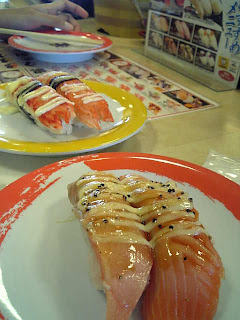 The all time favourite, black pepper salmon and mayonnaise crab
Ok, we went to Joushin before that and Ulya got herself a hand held vacuum cleaner~ remind me to borrow that thing from her to vacuum my room... And after that we bought an ice cream from Baskin Robin and only then we go to the Genki Sushi.

After a 1100yen of Sushi ( each ), we decided went to the station. Why? something about Botch wanted to buy a pen. Why don`t just buy it at the near convenient store? He said they don`t look very nice. Though the reason was ridiculously dumb, we still enjoyed our time at the station.
Hayate no Gotoku number 17 is supposed to be out in October, but it is still not there though. I`ll check it next week again. While the others are looking for their stuffs, I went to the other stores with Ulya.

It was during that time I saw this.... 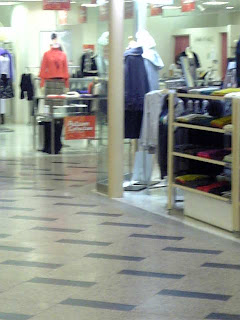 A Baju Melayu with Sampin for sale!!! ( the red shirt at the back )
I didn`t check it up close though, but hey, there`s a photographic proof right here! All hail baju melayu! All hail hari raya! hahahahah~

And the night ends...

BTW, I forgot to tell you guys in the last post.

Until next time!
By Unknown