From the creator of The Bug`s Life comes... CARS 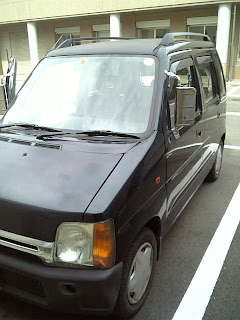 Anyway, a lot of people wanted to look at "my" ( its not practically mine, we; and by we I mean Azie, Niza, Tiqa, Ulya, and I, shared money to buy it, so it`s really ours, rather than mine ) car that I used here in Japan, well that is it. Kinda like Malaysian Kenari rite~? told ya~

I would probably be needing another car ( as now I am living in a dorm ) in 2 years time, so I`ll probably buy another car ( by my own, and use AP to bring it back to Malaysia, maybe )

Since I don`t know the specification of the car, and I highly doubt anyone I know would actually care, this would be all for this post.

It`s getting colder, so be careful not to catch a cold~