You are what you eat. So if one were to eat cucur Badak will he become strong like Badak? or better still, we he become a Badak? Interesting indeed. Lets take a look at my weekend menu here in Japan...

For the most important meal of day~ 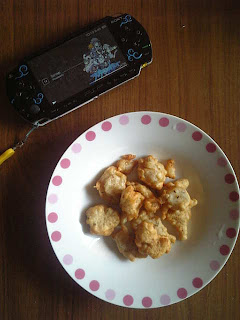 Some cucur Udang with ikan bilis, the PSP can`t be eaten

Am I a morning person? No. I`m a nocturne. Why would a nocturne be making a breakfast at 8 am in the morning? There`s a story for that. And that time it involve me, Azie, Wilson, a car, and the need for someone to send someother guys early in the morning somewhere. So no, I don`t usually eat breakfast. I often go for brunch or a 2pm breakfast. 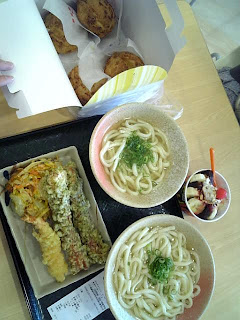 Udon, chikuwa, shrimp, with ice cream and creampuff as dessert

Udon is the cheapest yet literally mouth watering meal you can get in Japan hands down. The ice cream is from Baskin Robin, and the Udon is from Hanamaru. The names where you definately know once you got here. Udon tastes like..... well... Mee. Just for the record, I didn`t eat both of the Udon, the larger one is mine, the smaller one is Ulya`s.

Last but never the least, for dinner. 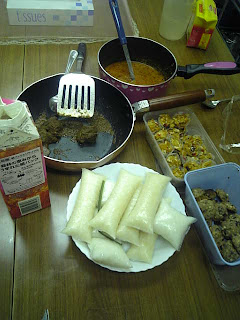 Ketupat, rendang, kuah kacang, and nasik himpit. With kuih raya as a dessert ^_^

Aaaahhh~ nothing can go wrong with Malaysian cooking. Just for the record, these are all instant or ready made stuff. So takde la aku tere masak sgt~ :P Maybe one of these days I`ll post the pic of what I cooked. herm herm. Oh, anyway, the I helped making the blue tupperwared kuih raya~ heheheh~ ( most of the work was done by my sis though )

So~! Are we what we eat? cause if we are, then at the end of the day I`ll become a shrimp swimming in kuah kacang~ :)) later dude~
By Unknown