I posted last week about Dungeon Twister and how I am excited about the game right?

Here is my personal review.


When I started to download the game, I was rather shocked. The file is only 156MB. Almost like a mini. The price is $9.99, which seems kinda overprice I think? Bought it anyway, though. Huuuuu~

Loading screen was as expected, simple. Just text. Font type Arial. Havent seen one of those since... I dont know, cheap ps2 games?

However, presentation asides, the game - the main dish - is an A plus.


As usual, single and multiplayer mode. No splitscreen though, not that I care.

I was..... A n00b in this game. I only heard about this game a week before it came out at playstation blog. I was paying a really close intention at the tutorial

The tutorial is great. I just knew this game and here I am, on challenge 12 of the game. BTW, on default, there is only 10 challenges, after youve beaten the 10th challenge, the 11 will unlock, and after you beat that, the 12th will unlock. Im still thinking how to beat the game using only 2 pieces AND without the +4 , +5 , and +6 battle card.

In a sense, even if you dont like playing online, the single mode is great. They even rank you up in the single player mode.

You got points when you beat the challenge mode... 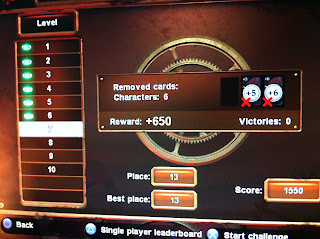 And then they rank you up. 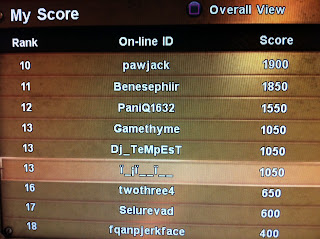 My name is bugged!!!! Seeing why all the other player didnt get their name bugged, Im guessing it is because Im playing with my Japanese account I think. Racist, racist everywhere. ( Lol, im just joking, but please, repair that bug. )

Reason is... The game itself is quite long. Imagine you playing chess online. Plus Im a new player, although Im quite good Id prefer to play against someone I know first, however none of my friends play this. T_T

Im guessing everyone feels the same as me so the game didnt got many online players. Anyone wants to have a round with me please invite. Akimura87


The graphic in the game itself is above average I think. Unlike the loading screen, you can control the camera, follow the opponent moves, zoom in, zoom out etc. The models are made above average. I was hoping when you move the pieces, there is an option that enable the camera to turn into 1st person view, the fireball cutscene couldve be more dramatic, but nope. Though maybe its better that way. This game is a board game, not an action game.


Not really noticeable.  It wouldve been better if each of the pieces got their own catch phrases or something. ( Phrases that left an impression to me is from red alert. Mean green and unseen. Surely you know what unit says this right? Leave the answer at the comment )


Challenging but not good enough.

There was this one time, the thief, wallwalker and warrior has already passed the goal line or killed ( No longer usable, no one can get through the locked door ), I managed to trap most of the opponent by rotating the floors. With nobody able to access the rotating device, all the AI did was pass his turn. The AI could have just move and take the really long way or just use the Troll I didnt manage to trap, but nope.


Great game for board game lovers. Though seriously, could have been MUCH better. Great board  game, great idea, the refreshing originality is there but the digital implantation is really weak. Hopefully there is an update or great DLC coming up. Im giving this game a root 3 point.

Root 3, quite difficult to describe. Its best if you dont show it to elementary students.

My strategy in playing the game.

Thief is the most versatile piece, with 5 box range movement, 2 attack and defense, the ability to ferry other pieces across pit and open/close doors, it my most lovable piece of the game. It is also easy to abuse the piece and score 2 victory points in one move. Get the speed potion, get the treasure and get out.

Mage is quite good. 4 box range movement with 1 attack and defense. A fragile old man that can hover over pit and enemy which is quite useful. Get him a fireball and you get a free 1 victory point.

These two are best to put at the edge of the board and let the other take the center. Easier to take all your pieces out.

Troll is your.... Troll. Put him at the opponent gate is probably the best idea. With 2 box range movement, 4 attack and defense, he is really slow but pack a punch. You can easily kill the idle pieces with it. Even if he is ganged upon, he can regenerate, or you can just move him pass the line. An easy 1 victory point.

Cleric is your field medic. With 4 box range movement, 2 attack and defense, the best way to play him is to pair him with another piece. Crucial because if you didnt heal your piece, your pieces die, which lead to you losing a point and cant getting a point. Oh, FYI, carrying your piece with another piece across the line didnt count as two victory points.

Goblin is great if your aim is to get through the line only. Getting him over the line equivalent to 2 points. With 4 box range movement, it shouldnt be too difficult if you try. He is quite fragile with 1 attack and defense though, best paired with another piece.

Mechanic is great because turning the floor anti-clockwise can be a great game turning point. However he is quite slow with only 3 box range movement. So best to be put in the middle.


Warrior is your fighter, great if your strategy is to destroy the opponent pieces. Quite slow with 3 box movement but pack a punch with 3 attack and defense. Oh, he can break the doors too. Useful if your thief is far and rotating the floor is too much of a trouble.

Last but not least, wallwalker. Like the name, she walk through wall. However she only walk through wall if you stand in front of the wall. Meaning you have to go to a wall, stop, wallwalk. 4 box range movement so quite handy, quite fragile with 1 attack and defense.


Get through the line. Solo move through unguarded path. Main piece would be thief, wizard and goblin I think. However getting the thief early in the game isnt a good idea.


Kill the enemy. My favorite. Best if you kill the weakling and avoid the tanks. Might want to ready cleric just in case. Get the wizard his fireball for an easy kill.


Get the wizard his fireball. Kill someone with the fireball, 1VP. Gang up/use a strong piece to kill a weakling or two for a 1 or 2VPs. If your Troll is near the line, just cross for a VP. After managed to get 3VP, get the wizard and thief out. Speed potion helps.


That is my opinion. Leave in the comment for your thoughts. Invite me for a game sometime.