In Wednesday; just after the TOEIC test ( which by the way, really easy, easier than last year`s question at least ) we ( by we; I mean, Ulya and I ) are " forcefully invited" by Haga-san to participate in..... Well... if I have to say it, it have to be " to write something in a piece of a flag "

This flag. The bird in the middle is Nagaoka`s symbol ( so been said ) 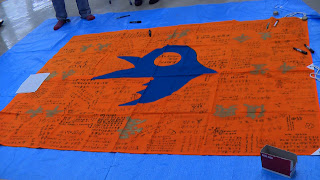 It took me 30 minutes to actually comprehend what the flag is all about. At first I thought it was going o be a flag as a message of peace. ( which then I told Ulya and she wrote Lets stay in Peace ) However after that I learnt that the flag is to be sent to China as an humanatirian act ( pardon the spelling ). It seems that China recently experienced a devastating earthquake, and the Chikyu-Rabu; our school international helpers is going to lend a hand.

Thus I wrote " Menuju Mentari Esok" in Malay and " inna maal usri yusra " in Arabic. In case youre wondering, beside what I wrote there are Japanese, Portugal, Brazilian,Chinese language already writen. 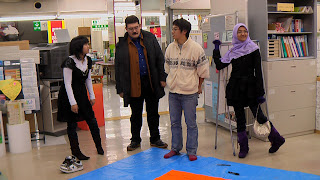 Oh, the place where the flag is being sign is not in our school. It is at a Chikyu-Rabu HQ; in front of the station. We are ment to go with our car; it got stuck in the snow unfortunately T_T, so Haga gives us a ride instead. So if youre to ask " Did you came all the way for a piece of flag?" the answer would be a straight " yes ".

After we signed the flag, we looked around the HQ. It seems that they too are trying to help the Palestinians. There is even something about Gaza this Saturday, tho Im afraid Im not going to make it. 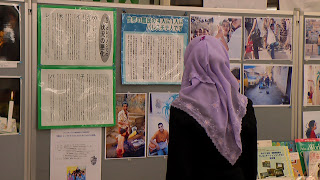 Ulya reading an article about Palestine. Even a non-muslim organization is helping them now; why havent the killing stop?
Ok, after we already tried, se everything there are to see, we decided to go to eat. The HQ just happens to be near this Okonomiyaki store, so yeah, lets go. 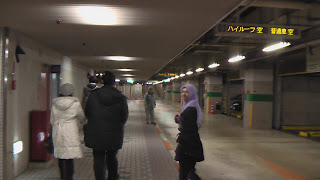 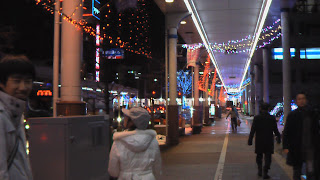 Believe it or not the (1) and (2) is the same place. The Japanese basicly build a parking space that covered the whole district ( roads and shops are over the parking, creative ) . Then again it`s kinda like what most shopping mall in Malaysia did right? I mean, theres even underground parking at Warta.

What is Okonomiyaki? the direct translation of the word would be " Kesukaan goreng " (??) basicly you just throw in to the mixing whatever you want and just goreng it. Easy and delicious.

An okonomiyaki, ready to be eaten! 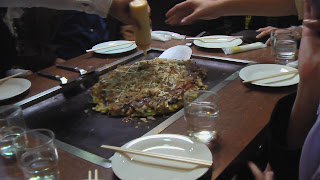 Thought for the day : The thing that is close to you is the hardest to see.

which reminds me, where is my glasses?